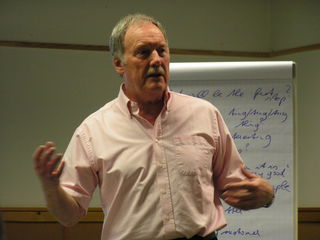 I've just had some very sad news - John Sproson has died.  John was one of the very first members of the 'SF EDGe' group that Paul Z and I set up in 2004 for people who'd trained with us, and he maintained a very active participation in the SF community including being part of the organising team for SOLWorld 2012 in Oxford, and also the forthcoming 2013 event.

I wonder if people might like to post their memories of John and his particular contributions to our community and our lives?  I have more to say too - would like to reflect on it for a few moments first.

Replies to This Discussion

Permalink Reply by Lilliane iculet on March 18, 2013 at 17:38
Really sad indeed....at a time we are gearing to meet again for sol2013. John was very helpful to us( team from Uganda) when we were preparing to attend sol2012 for the first time. He kept us updated and provided supporting reference which enabled us have a smooth visa application. I was very impressed with his workshop in Oxford on " SF benefits in life threatening situations" where he freely shared on his personal life experience. This workshop insights became a "manual" with friends and family who are in life threatening situations because I passed on the great positive lessons from John's testimony. I know SF gave him renewed energy and we will keep believing and applying. To his fellow organising teammates, my sincere empathises as you keep the goal of sol2013 in view - even through this. To his family and friends John touched us too, this far away in Uganda.

I'm so sad to hear that, Mark.  He always was so supportive and had great comments on the listserve.  He will be missed.

I had the opportunity to meet and work with John for the first time, as part of the SOL World2012 team. My memory of John is someone who was determined to live life to the full. His contribution to that group was significant, and hugely generous, considering where he was personally. A sad loss indeed.

I will remember John as a man of courage and dignity. Our paths crossed a few times when I travelled from South Africa or Australia to Solution-focused Brief events in the UK and Europe.

He made time to welcome me and connect me with people I had not met before.

I admired and appreciated how he lived with his illness, taking note of it while also continuing with what brought meaning and vitality to his life.

I shall light a candle for him here on the tip of Southern Africa, and hope that his family and friends receive much warmth and kindness as they take their leave of John.

I am happy that I saw John enthousiastic, powerful, smiling, full of life at SOLworld in Oxford. What a difference in strength compared to the Summer Retreat in Passugg. I am now smiling and am so grateful that SF has made a tremendous difference in his life and also all our lives!!

Let's cherish Johns will and passion that influenced so many people!!

Very sad news indeed. I remember John welcoming me and always say something to me whenever he sees me at the SOL conferences when I was new, and that made me feel really at home. I was impressed with his story of sales and SF. I did not what was happening to him during recent years, but when I saw him in Oxford last year, I felt his passion for life getting stronger despite the physical difficulty. I can imagine he made his last days of life full of meaning and dignity. Please rest in peace, John.

I've been reflecting on all the times I spent with John over the past nine years... he was always committed to practical things like 'selling' and 'confidence' yet he also joined in with other more conceptual work - I remember him coming to Sweden for a session I was running a few years ago.  I remember his as a very warm and generous person, always impeccably turned out (very often the only one in the room in a suit!).  My last conversation with him was around three months ago when we talked about his illness and how he was using SF ideas to keep going.  At that time he was optimistic and full of praise for his doctors and the NHS in supporting him.  His articles and writing about SF selling were picked up by people from all over the world, as the tributes above show.  Much missed.

I remember John as a very passionate and warm man. A real gentleman, with a lot of style and dignity.

During the first summer retreat in 2010, I got to know him a little bit better. He was great company and a big pleasure in our group of retreaters! He was involved, enthusiastic, concerned and he had an amazing sense of humour. You can see him in the movie that Jesper made where he sang 'thank you for the retreat' http://www.solworld.org/video/thank-you-for-the-retreat.

The second retreat, he looked extremely ill, I couldn't believe it was him and that he wanted to participate in his condition. But he still stood there proudly and determined, as if he was ignoring his illness. Later he told me how happy he had been to be there, to join and fully participate, despite all the pain and nausea that he overcame in private, every day, every meal.... John always stayed a gentleman, never asking for pity or compassion in the hardships he had to go through.

In Oxford he  told me how immensely happy he had been to be alive to lead his daughter to the altar. He looked a lot better and seemed triumphing over adversity. I remember my surprise for this unbelievable recovery and was in awe for his strong mental strength and his belief in life. Could it be...?
After having taken an important leading role in the organisation of SOL 2012,  he offered his help for the next year, he wanted to share the learnings and his marketing wisdom for the community. He looked unbeatable and  amazingly engaged in the  SOL community, like a real father.

And then, in silence, away from it all, he suddenly left us... like a thief in the night...  as if he didn't want us to feel pity for him or witness his sufferings.

We will miss you, John.... and we will remember you always as a truly inspirational man, someone who managed to live and inspire others by his courage, passion for life and hope to live forever. You will live forever in our hearts dear friend. Rest In peace.

Thank you so much, Liselotte for your gentle and heart-warming words. You wrote what I think as well.

I shall always remember John as a man of great enthusiasm - for life,as he showed so determinedly over the last couple of years, for learning and for sharing.  And I shall remember him as a listener too - someone who could give people space to think, while listening for signs of hope and for signs of strength.  I was going to say that if I am stricken with such an illness, I'll use John as my source of inspiration and courage - and then I realised that I could do that now!  John: you are my source of inspiration and courage.  Jenny

I am sad to learn of John's passing. I did not know John well, but his was the first face I saw and recognised as I turned into Keble College for the start of SOL 2012 in Oxford - my first ever SOL experience. I knew from John's warm and friendly welcome that there was no need to be nervous and that all would be well. I am grateful to John for being someone that I know gave an immense amount of input, behind the scenes, to the SF events and forums that have helped me learn and grow as a relatively new SF practitioner. My thoughts and prayers are with his family and friends.

I met John several times at a lot of conferences. At the summer-retreat in switzerland he told us about his illness. First time he was pale and still powerful and resource oriented, second time he was already full of new plans. Always engaged in discussions. And last year in Oxford, he told us how to survive. I was deeply impressed. And, I leaned so much from him and how he managed  his difficult situation.

A wonderful man has gone. I'm so sorry for his family.